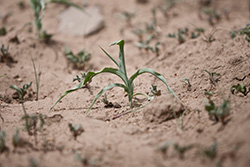 Water scarcity is a growing threat that, unaddressed, will hamper the global push to build a fairer, more-sustainable world. To ensure water scarcity in agriculture doesn’t threaten food security to a growing population, FAO and partners launched the Global Framework on Water Scarcity in Agriculture (WASAG) at the UN climate summit (COP 22) in Marrakech November 2016.

This year, Climate-KIC (led by SLU Director Daniel Zimmer) and the World Bank have been named as co-chairs of the Working Group on Financial Tools for the Global Framework on Water Scarcity for Agriculture. It’s an Office of United Nations initiative launched in the COP22, FAO hosts the Secretariat. Climate-KIC became a partner of the initiative in April 2017, joining other WASAG members.

Daniel Zimmer is Director of Climate-KiC’s Sustainable Land Use theme and has a global experience on climate and water-related issues spanning from engineering to geopolitics and with a particular interest for innovation. He worked for several years (1988-2001) as a researcher and head of a research department in a French Public Research Centre (IRSTEA).

Between 2001 and 2009, Daniel was also CEO of the World Water Council between 2001 and 2009, an international umbrella organisation of the water sector based in Marseilles. He contributed to the development of this institution and to its triennial flagship event, the World Water Forum. During his time there, he developed political processes for Governments and Local Authorities, and managed projects on financial issues, climate, disasters related to water.

In addition to the Working Group on financial tools (co-chaired by Daniel), there are four others under this umbrella: food nutrition, agricultural production, drought management and migrations.

Link to Rome Statement on Water Scarcity in Agriculture, published in April 2017
http://www.fao.org/land-water/overview/wasag/en/